How to Handle Sewer Backup Damage 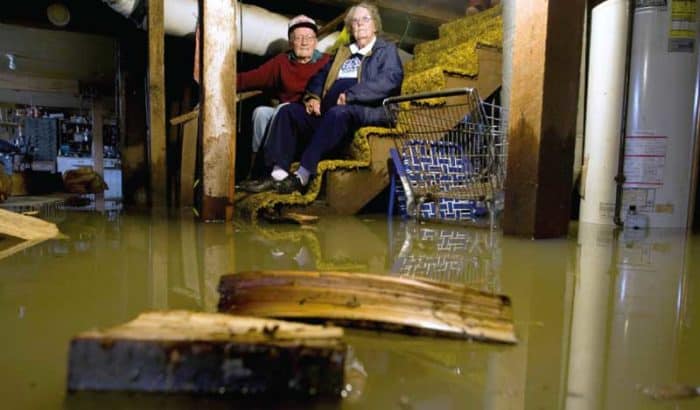 Summer in Canada often means intense rainfall. As the humidity climbs higher, so does the likelihood of thunderstorms that can bring heavy rain in a short period of time. The increased waters dumped into the ground brings with it an increased risk of sewage backups. Municipalities across the country still rely on combined sewage and storm drain systems, so when bad weather overwhelms the pipes, it can be homeowners who pay the price.

Take for example the municipality of Wood Buffalo, a subdivision outside of Fort McMurray, Alberta. A grease buildup in the sewage system wound up blocking sewage flow, something residents didn’t discover until a rainstorm was quickly followed by some upsetting overflowing plumbing. Basements were left with inches of raw sewage, contaminating cherished possessions and causing extensive damage to floors, appliances, and walls.

According to the municipality, grease build up blocked the main sewer pipe. When runoff from the rain increased the volume of water entering the system, it became too much to handle. With nowhere else for the water to go, it wound up flowing back up through the pipes and into residents’ homes.

Why Sewers Back Up

Sewer backups are a common issue, especially in cities with older sewage/storm drain systems that weren’t built to handle the volumes of rainfall Canada sees today. Grease, fat, and cooking oils can catch on products such as wet wipes that should not be flushed, to begin with. The result can be an extreme sewage blockage that can impact the homes upstream the next time the system is overwhelmed.

Are Municipalities Liable for Damage?

If poor sewer maintenance is the reason your home is damaged, can the municipality be found liable? The most common types of claims in a suit against municipalities rely on negligence, environmental legislation, or negligent approvals (such as development approvals the city should not have issued).

However, municipalities have unique defences in court, such as statutory immunity to protect themselves from claims other than negligence; they may also argue that the lack of maintenance was not negligence but a policy decision given the high costs of maintaining catch basins. In the case of a sewer blockage, homeowners might be able to make a case for negligence; but if the system was overwhelmed by heavy rainfall alone, homeowners might be left relying on their insurance policies.

Cleaning Up After a Sewage Backup

Raw sewage is hazardous to your health. When you inspect the damage, make sure you wear protective gear, such as rubber boots and gloves, as well as a mask to stop you from inhaling toxic gases. Once the water is removed, everything will have to be washed and disinfected. For your safety, you may want to call professionals to take care of this.

Sewage backups can lead to extensive damages and content loss insurance claims for damaged possessions. This is all in addition to claims for structural damages to the floors and walls, or even damages caused by loss of use if your home is unlivable for any period of time.

When sewage contaminates your personal belongings, many will have to be thrown out and replaced. You can make a content insurance claim for the costs of replacing or salvaging (cleaning) damaged personal belongings such as clothing and linens, furniture, or electronics.

If you intend on making an insurance claim, make sure you inventory your damaged belongings before removing them. Take pictures and videos, and write down descriptions of the items before removal. For health reasons, you may want to start cleaning up before an insurance adjuster sees the damage, but if you can wait, it is generally best to let them see damaged space and contents for themselves.

Structure / Dwelling coverage may be claimed if you have to renovate your basement or any part of your house due to a sewage backup. Raw sewage can contain major health hazards and water alone can cause structural damage. The longer your home is under sewage, the more extensive the repairs will be.

Common renovations after a sewer backup include replacing flooring and insulation materials that have soaked up the sewage, repairing cracked or blocked pipes that caused the damage, replacing cabinets or drywall that could not be cleaned, and tile, concrete, and linoleum exposed long enough for black mould to grow.

Since raw sewage can spread disease and encourage the growth of black mould, families experiencing sewer backup should not stay in their home until the cleanup process has been completed. If your insurance policy covers sewer backups, your family may make an Additional Living Expenses claim to cover the costs of staying elsewhere until the cleanup is complete. These costs can include hotel stays or short-term rentals, extra transportation costs, and extra food costs.

Although municipalities may be found liable due to their negligence, the costs of settling may be lower than updating or maintaining the sewage systems. You may want to take steps to prevent damage in the future, such as installing a backwater valve that will prevent backwater flow when the city storm system is overwhelmed. You may also want to have your plumbing and sewage connections inspected, especially if your neighbours did not experience similar damage, or if it becomes a repeat problem.

A sewer backup isn’t just an inconvenience. It can be hazardous to your health and require extensive cleanup to make your home livable once more. Find out if your home insurance policy covers the damage and make a claim to help you clean up.